Despite the massive investment in maternal care over the last three decades, Nigeria still has the highest home deliveries in sub-Saharan Africa. This study utilized live birth and socio-economic data compiled in 2018 by the National Population Commission (NPC), Nigeria to understand seasonal patterns of births in Lokoja, North-central Nigeria. The monthly reported health data was collected from 12,589 reproductive aged women in 13 health facilities for five years (2014 - 2018). Analysis of Variance was employed to examine significant variations in birth seasonality, while student’s t-test was used to compare birth rate in urban and rural areas. The results showed that a total of 38,696 live births was recorded from 2014 – 2018. Majority (90.75%) of the reproductive aged women was 20-39years, 70 percent of whom were educated with at least primary education, and 84.2 percent gave birth in the hospital. There was no significant statistical difference in male and female births (t = 0.271, p>0.05).  The highest births were recorded in December, July, and August (47.48%), while the lowest births occurred in March and February (9.67%). Conception was higher in April (22.5%) and lower in July (4.66%). Urban areas recorded more deliveries in the hospitals. There was a significant upward pattern in live births from 2014 to 2018, with 29.6 percent increase. It is recommended that sexual and reproductive health related interventions should focus more on the influence of socio-economic and seasonal barriers. This is to enable reproductive women better able to plan their pregnancies to control fertility rate. 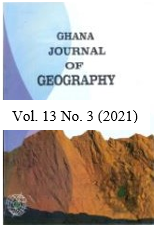