Land commercialisation for cashew cultivation and its implication for land disputes in the Wenchi Municipality, Ghana

Cashew cultivation has recently acquired an
important position in Ghanaian smallholder farming.
The cultivation and export of cashew have resulted
in improved household income and social status
while at the same time causing gendered and
intergenerational tensions in access to land, with the
potential for land disputes. This paper examines the
tenurial arrangement on land for cashew cultivation
and its implication for land disputes in the Wenchi
Municipality. With data collected from 200 households
and 30 key informants, the study revealed that land
commercialisation for cashew cultivation triggers
and amplifies land disputes, such as inheritance and
boundary disputes. These disputes further affect the
extent of rural agricultural investment and socioeconomic development by destroying the rural moral
economy, sustenance of livelihoods and the loss of lives
and property through untitled land rights. To minimise
land disputes in the community, the traditional leaders and family heads
should restructure land inheritance practices and educate the farmers
to properly mark the boundary of the acquired land before its use.
. 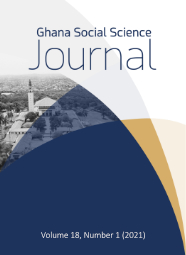